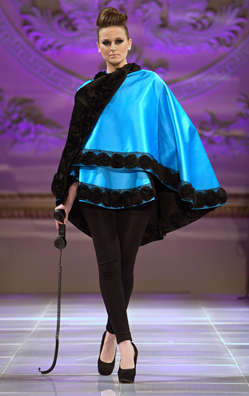 Dedicated to Isabella Alafoyiannis – Save Grandmothers from Breast Cancer

Designer Loula Loi Alafoyiannis will return to Couture Fashion Week with a presentation of her latest distinctive outerwear designs at 4:00 pm on Saturday September 7, 2013. The runway show will be held in the Grand Ballroom of the New Yorker Hotel, 481 Eighth Avenue, in the heart of the city’s Fashion District.

Each design by Loula is a one-of-a-kind collectible, where fashion is wearable fine art. The creations are sophisticated yet whimsical, and impeccably crafted in silhouettes that have wide appeal.

Loula is the Founder and President of the Euro-American Women’s Council (EAWC). Loula is also the Founder of “Saving grandmothers from breast cancer” which she is supporting through her participation in this season’s Couture Fashion Week.

In its tradition of support for charity organizations, Couture Fashion Week New York has announced that it is partnering with the Greater New York City Affiliate of Susan G. Komen for the Cure® at its next fashion event.Couture Fashion Week will be held 10-12 September 2010 at the Waldorf-Astoria Hotel on New York’s Park Avenue.

Since 2003 Couture Fashion Week has presented a series of couture and luxury high fashion shows multiple times each year in New York City, Palm Beach, and other selected cities and countries. The event presents runway shows by exceptional designers from around the globe and also features world-class entertainment, exhibits of fine art and luxury products/services, plus VIP dinners and receptions.

This coming season, Couture Fashion Week will contribute 10% of tickets purchased here to the Greater NYC Affiliate of Susan G. Komen for the Cure®. Couture Fashion Week’s founder and producer Andres Aquino – who is also a seasoned and accomplished fashion designer – will present his latest collection at a special “Pink Night” at 8:00 p.m. on Saturday 11 September, with a representative of the Komen organization walking the runway in a custom-designed pink gown.

“We are delighted to cooperate with Greater NYC Affiliate of Susan G. Komen for the Cure®“, notes Andres Aquino. “The organization does wonderful work. As a fashion concern, women’s health is especially dear to us because good health is fundamental to beauty.”